I am avid reader and appreciator of hackernews that somehow (even on dinners) it comes in my conversations, I become extremely enthusiastic about it and within few minutes I will get the android app installed. So while I was reading I read this article, I also read the reddit discussion on this. So this blog gave me the required push to don the hat to write this blog. I have meaning to write this blog for some time.

There are multiple ways getting started to kubernetes. Minikube is the more popular choice. But I took the road less travelled. Not just because of robert frost, but also due to docker being installed. So I used the project kubernetes in docker(kind). Kind of love to keep my system minimalistic and neat.

Getting started with kind and openfaas

I will explain in later part of blog what different things I am going to get you installed. Download the binary

Make sure that your current linux user have the right to use docker without sudo. Adding –loglevel shows you what’s happening. If everything goes fine you will get “Cluster creation complete.” To check if a cluster was created

Now moving forward, we have to install kubectl to manage the kubernetes cluster you have created.

Now keep checking “kubectl get all -n openfaas” until you get status of “pod/gateway” in Running. After you get that do

Now in the last step

Play with the ui portal. Check out their official doc
Checkout their lab on how to features available in openfaas. lab

What I really liked about openfaas was how they package their function. There is no need to download runtime as in Openwhisk. Even setting up openwhisk is tough. I have doubts regarding how much it is being maintained. Openfaas ran at the first instance. No debugging required.

How do Openfaas package it’s application ?

Openfaas package their application in docker. In openwhisk there is already a predefined runtime, but if you want a different runtime you can define blackbox docker-actions, otherwise you have to write a manifest. In aws serverless you have to package them as zip. In open faas you can add extra dependency in an intuitve environment friendly way. Even writing function is really easy. So you can make a build job on your devops server which pushes your created docker image to your private docker registry. Some openfaas cli commands references

This part of the blog is meant as a note to self rather than a tutorial.

Ref
There are 8 feature which kubernetes promises to fulfil:-

All credits to kelseyhightower because I am copying straightaway. Ref

This step is called Bootstrapping the etcd Cluster. etcd is a distributed reliable key-value store which is used to store cluster state.

All these steps will be replicated in all controller nodes.

In this section you will configure RBAC permissions to allow the Kubernetes API Server to access the Kubelet API on each worker node. Access to the Kubelet API is required for retrieving metrics, logs, and executing commands in pods.

In this step we will bootstrap the Kubernetes worker nodes. Run these command on each worker node.

Pods scheduled to a node receive an IP address from the node’s Pod CIDR range. At this point pods can not communicate with other pods running on different nodes due to missing network routes. 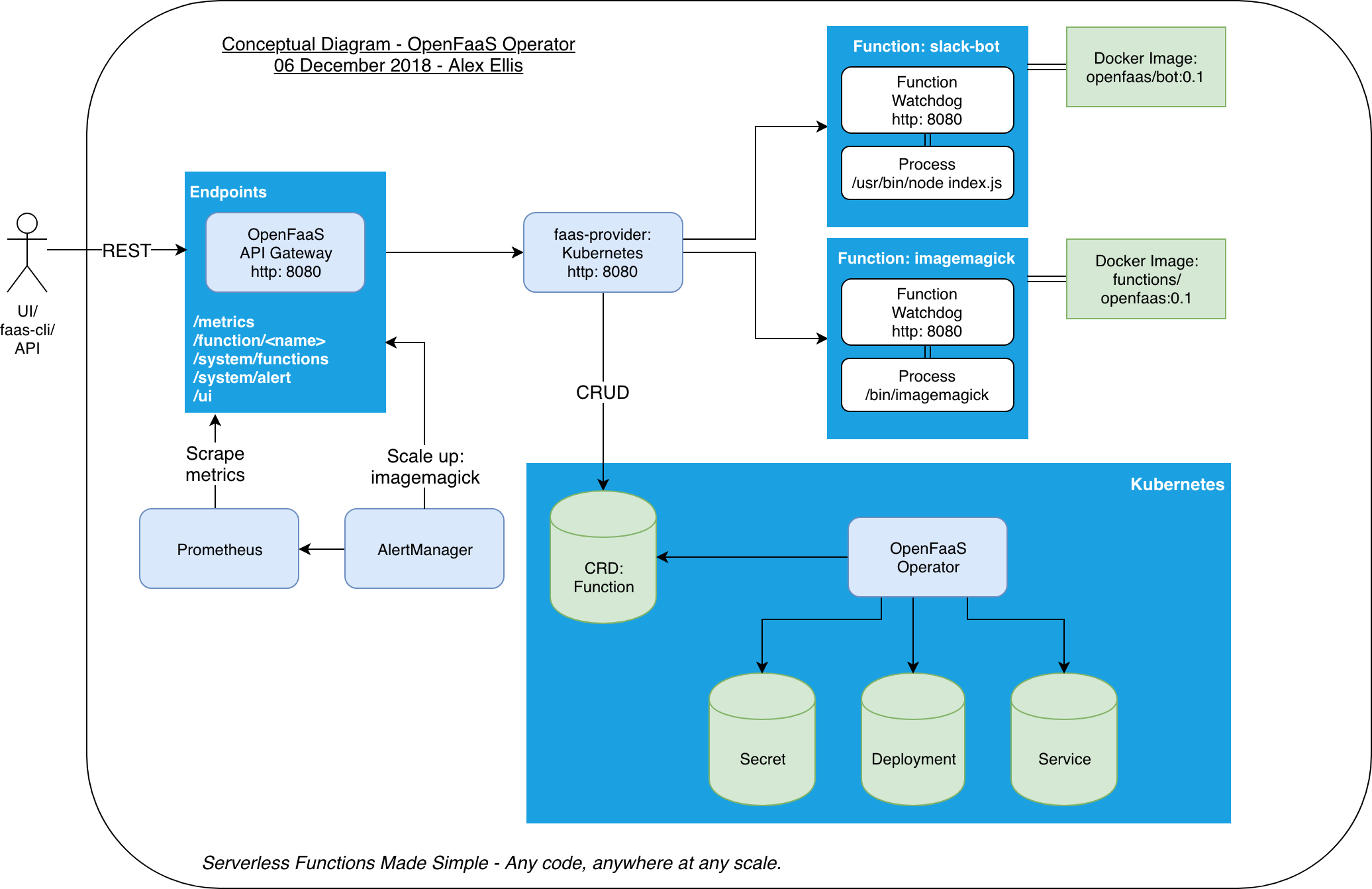 When deployed each function creates 1 to many Pods/containers depending on the minimum and maximum scaling parameters requested by the user.

The API Gateway handles AlertManager alerts through its /system/alert route.The minimum (initial) and maximum replica count can be set at deployment time by adding a label to the function.

Kubectl is a command line interface for running commands against Kubernetes clusters. kubectl looks for a file named config in the $HOME/.kube directory. You can specify other kubeconfig files by setting the KUBECONFIG environment variable or by setting the –kubeconfig flag. All those commands of creation on kubeconfig, getting custer health, and everything needed to manage a kubernetes cluster can be done using kubectl. Kubectl-CheatSheet

Kubeadm is a tool built to provide kubeadm init and kubeadm join as best-practice “fast paths” for creating Kubernetes clusters. kubeadm performs the actions necessary to get a minimum viable cluster up and running. By design, it cares only about bootstrapping, not about provisioning machines. Checkout kubeadm commands here.

kops helps you create, destroy, upgrade and maintain production-grade, highly available, Kubernetes clusters from the command line. AWS (Amazon Web Services) is currently officially supported, with GCE and OpenStack in beta support, and VMware vSphere in alpha, and other platforms planned. HOw is it different from kubeadm is kubeadm doesn’t allocate or deallocate resource.

It is a lightweight version of kubernetes. It is a fully compliant Kubernetes distribution. A binary of less than 40 MB. Only 512 MB of RAM required to run. Reference to build your own cluster. Ref