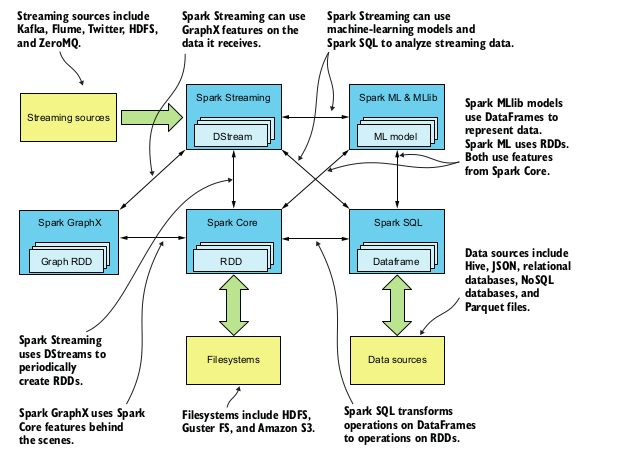 Where we should/’nt use Apache spark ?

How spark fulfill shortcomings of hadoop ?

Hadoop bas one basic shortcoming (not totally) that for distribution of data it uses reading and writing from hard disk, for which max speed can be 160 MB/s and if you use SSD it will be 300 MB/s where as for DRAM it is 20420 MB/s, So by desing it is a lot faster. Spark’s core concept is an in-memory execution model that enables caching job data in memory instead of fetching it from disk every time, as MapReduce does.

It represents a collection of elements that is immutable, resilient and distributed. They don’t handle fault tolerance like hadoop by replicating data but by logging the transformations used to build a dataset, If a node fails, only a subset of the dataset that resided on the failed node needs to be recomputed. RDD is a really abstract concept, it looks quite simple from top but it’s not there is lot of things going beneath the hood.

Text file RDDs can be created using SparkContext’s textFile method. This method takes an URI for the file (either a local path on the machine, or a hdfs://, s3a://, etc URI) and reads it as a collection of lines.

There are some other function like flatmap, union, groupByKey etc. Visit-All

Spark Streaming is a framework for ingesting real-time streaming data from various sources. The supported streaming sources include HDFS , Kafka, Flume, Twitter,Zero MQ , and custom ones.

Kafka Streams is still best used in a “Kafka > Kafka” context, while Spark Streaming could be used for a “Kafka > Database” or “Kafka > Data science model” type of context. Ref

Graphs are data structures comprising vertices and the edges connecting them. GraphX provides functions for building graphs, represented as graph RDD s: EdgeRDD and VertexRDD . GraphX contains implementations of the most important algorithms of graph theory, such as page rank, connected components, shortest paths, SVD++ , and others. It also provides the Pregel message-passing API , the same API for large-scale graph processing implemented by Apache Giraph.

How does DAG works in Spark ?

At high level, when any action is called on the RDD, Spark creates the DAG and submits it to the DAG scheduler.

Narrow transformation - doesn’t require the data to be shuffled across the partitions. for example, Map, filter etc.. wide transformation- requires the data to be shuffled for example, reduceByKey etc.. This sequence of commands implicitly defines a DAG of RDD objects (RDD lineage) that will be used later when an action is called. Each RDD maintains a pointer to one or more parents along with the metadata about what type of relationship it has with the parent. For example, when we call val b = a.map() on a RDD, the RDD b keeps a reference to its parent a, that’s a lineage. To display the lineage of an RDD, Spark provides a debug method toDebugString().Ref

Commands, Configuration, and other stuff

I will try to restrict the domain to spark rather than going in MLlib, H20 or Graphx.

Accumulators are variables that are only “added” to through an associative and commutative operation and can therefore be efficiently supported in parallel. A numeric accumulator can be created by calling SparkContext.longAccumulator() or SparkContext.doubleAccumulator() to accumulate values of type Long or Double, respectively

The entry point into all functionality in Spark is the SparkSession class. To create a basic SparkSession, just use SparkSession.builder(): import org.apache.spark.sql.SparkSession

There are lot of other function. Reference

There is a lot of other functionality for hive, parquet etc.Ref

A Duration object(Seconds(1)), which specifies time intervals at which Spark Streaming should split the input stream data and create mini-batch RDD s. Instead of Seconds , you can use the Milliseconds and Minutes objects to specify duration.

There are two types of sources :

Spark Streaming will monitor the directory dataDirectory and process any files created in that directory.All files must be in the same data format.A file is considered part of a time period based on its modification time, not its creation time. Once processed, changes to a file within the current window will not cause the file to be reread. That is: updates are ignored.“Full” Filesystems such as HDFS tend to set the modification time on their files as soon as the output stream is created. When a file is opened, even before data has been completely written, it may be included in the DStream - after which updates to the file within the same window will be ignored. That is: changes may be missed, and data omitted from the stream.

Streams based on Custom Receivers

DStreams can be created with data streams received through custom receivers. Ref

Queue of RDDs as a Stream

We can create a DStream based on a queue of RDDs, using streamingContext.queueStream(queueOfRDDs). Each RDD pushed into the queue will be treated as a batch of data in the DStream, and processed like a stream.Ref

This category of sources require interfacing with external non-Spark libraries, some of them with complex dependencies (e.g., Kafka and Flume). Hence, to minimize issues related to version conflicts of dependencies, the functionality to create DStreams from these sources has been moved to separate libraries that can be linked to explicitly when necessary. For integrating with kafka see this. Ref

Input DStreams can also be created out of custom data sources. All you have to do is implement a user-defined receiver (see next section to understand what that is) that can receive data from the custom sources and push it into Spark. Ref

The functionality of joining every batch in a data stream with another dataset is not directly exposed in the DStream API. However, you can easily use transform to do this. This enables very powerful possibilities. For example, one can do real-time data cleaning by joining the input data stream with precomputed spam information (maybe generated with Spark as well) and then filtering based on it.

Spark Streaming also provides windowed computations, which allow you to apply transformations over a sliding window of data.

Reference for function for sliding window

There is a lot of other intricacies dealt within rthe documentation like how to deal with broadcast variable, MLLIB,Fault tolerance, Setting the right batch interval, Data serialization ,Connection, Performace tuning etc. I have left those parts. I will deal with these later.